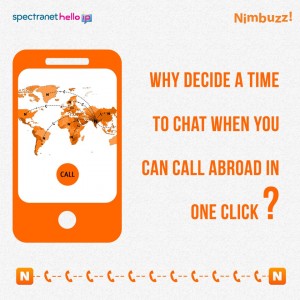 Nimbuzz recently launched a special calling program for Indian users for make cheap international calls.  hello ip program launched  by  Spectranet, India’s fast growing internet services provider and  Nimbuzz, the free messaging and entertainment app for the connected generation .This service offers cheap  international calls to mobile and fixed lines for prices as low as 1 paisa  per second and allow users to save almost 90% on their international calling spend. The service is available only to residents in India calling abroad and can be accessed on all regular data and Wi Fi networks.

How to use this programs ?

Using this service is simple as follows.
1.    Download the latest version of Nimbuzz for any device ,its completely free.Nimbuzz is available on thousands of the world’s most popular devices across all major platforms such as, Android, iOS, Symbian, Windows Phone, and J2ME, as well as Windows and Mac computers.
2.    Buy talk time with credit card or debit card. Special Spectranet prepaid card for buy talk time will be available near future.
3.    Make cheap calls.

What is the real call charges ?

The company offering 1 paisa per second international calls, but this rate available to few destinations only. The price plans divided as five zone.
Zone 1-   The countries included this zone are  UK, France, Italy, Spain, Hungary, Denmark, Sweden Fixed Lines and US, Canada fixed and mobile line.
Call charge 1 paisa per second to call this zone.

The existing Nimbuzz or NimbuzzOut user canot use Spectranet hello ip using the same username and password.
The will have to create  a new Nimbuzz account.Click here for create new account.

Opinion of Author- This is not very profitable as expected because the 1 paisa per second available only to limited destination and some providers already offering free calls to this destinations.  The most calling Middle East countries are not in profitable zone because 15 paisa per second is almost same calling rates charged by mobile operators.